Shunkan as commonly known, properly titled Heike Nyogo-no-shima is a long program, and originally consists of 5 acts. One of the acts, “Kikai-ga-sima no ba” has been frequently performed as a popular Kabuki repertoire. However, other acts have been disappeared due to censorship in wartime. In present program, Kinoshita-Kabuki presents almost all parts include the acts seldom performed. Thus, it reveals original theme of the drama – Dramas of women who deplore the cruelty of the war, and resist the power – which have been eliminated from popular kabuki repertoires. In addition, Kinoshita appropriates specific parts with corresponding keywords; sea, women, and suicidal drowning – from original script Heike monogatari / the Tale of Heike, scine of “Fujinoto”, “Dannoura”, and “Ashizuri”, origin of Shunkan. The appropriated parts are reconstructed as a new script and added as women’s narration to the story beginning.   A platform is set on the stage, and a huge white cloth covers ceiling above the stage. The platform is like an island or a ship, and the white cloth is like a water surface, a wave, or a sail. In present piece, the white cloth is used because of experimental implications. Originally, the cloth is a representative stage object of Shunkan in Kabuki, and it has been used for the stage effect. Kinoshita-Kabuki aims to verify the possibility – if modern theater can develop the classic stage method or forms, and if it’s variable with criticism. Women surrounding the platform, are individually come to the platform to contact with Shunkan, and they tell own tragedies. The platform is so simple object and suggestive for a Nor-theatre stage. Thus, Noh-theatre actors co-operated with present creation to verify Kinoshita-Kabuki’s statement – How can modern theatre performers take in classic embodiment or vocalization. 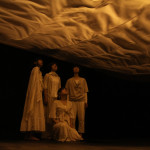